Synergies of Peace Through Intercultural Dialogue and Participation

Julia Felder24. January 2018Around the WorldVol. 7

In this article, I want to share my impressions of the elicitive peace work I currently do in Vorarlberg. This work aims to create synergies in conflict transformation, especially via fostering dialogue between those born in Austria, refugees and other migrants. But let me tell you something about myself first: I completed several university programs and most of what I learnt there I have already forgotten. What is likely my most educational experience was when I spent half a year in Ghana, before my studies. I learned during this experience that, like every individual, every culture has shadow and light aspects and that it is in the encounter with the other, that our collective and individual aspects get a chance for balance. In my life, this shift towards balance often felt like a crisis that I could get through transformed, if some sort of connectedness accompanied me in that crisis (connectedness to persons, a deeper meaning or to the universe as such). At the MA Program in Peace Studies at the University of Innsbruck, I learned about the concept of the many peaces, which provided me with a conceptual understanding of cultural shadow and light aspects in relation to peace interpretations and the cosmologies around them. In Innsbruck, I learned about the Theater for Living, a method that allows for dialogue in transrational connection and co-creation incorporating different perspectives. I have developed a huge sense of trust in this method, that roots itself in embodied creativity and fosters our collective intuition. It quickly connects diverse people, makes visible what seemed hidden and empowers those involved. In my current work in Vorarlberg, I also learned about circle dialogues, a simple practice which allows people to get into spoken dialogue in an easily accessible and yet deep way.

I learned during this experience that, like every individual, every culture has shadow and light aspects and that it is in the encounter with the other, that our collective and individual aspects get a chance for balance.

The work I do in Vorarlberg is not limited to specific topics. For example, I work in collaboration with initiatives that are engaged in food sovereignty, feminism, dialogue, media, human rights, arts, direct democracy, community living and nuclear disarmament. However, my main focus is on peace work in the context of migration and interculturality. While migrants with Turkish roots used to be the main subject to othering in Vorarlberg, today – like in many other European places – it is refugees who have taken this inglorious symbolic position. What sounds like a game is intertwined with thousands of deaths due to man-made borders every year and an increasing manifestation of control over citizens in the name of security. In an intriguing way, I see the discourse on migration and also the many reasons for persons to flee their country, as being related to the disconnection to mother earth and its children, which comes along with industrialisation and capitalism. In an individualist, competitive approach to the earth and its daughters and sons, there is little regard for the needs of the earth as a whole living system, which results in climate change, exploitation of resources and human and animal bodies, the increasing difficulty to live from the land especially in the periphery, dark images about the future of the next generations and loneliness and psychological stress in Central Europe. The emotional charge of the discourse is hard to bear, as long as old and yet intimate struggles seem to be disconnected. We published a statement of the association Friedenskraftwerk Vorarlberg, that discusses the concrete opportunities for peace arising from immigration to Vorarlberg. However, we cannot move towards peace in a merely rational way.

I facilitated several workshops on the topic of us and them with refugees and non-refugees from the age of ten up to the age of seventy. In one of the first of the workshops I facilitated, a participant said to me: “We didn’t only escape from war to save ourselves, but also because we did not want to kill anyone. Many of us had to choose: to be forced by the militia to kill, to refuse (and thus be killed by the militia), or to flee to live in peace.“ He was the first one and not the last one who said this to me so clearly, while at the same time local and national newspapers wrote headlines like “waves of refugees bring war and terrorism upon our doorstep.” Even though this seems to be a contradiction, also behind scary headlines that call for borders, we can find an interpretation of peace. In German there is a phrase, “Lass mich in Frieden”, which means “leave me in peace.” However, conflicts do not disappear just because the relation to our own existence is denied. As when we suppress inner conflicts, the struggle tends to get worse. And yet, it helps to understand this longing for security in its origins as a drive for peace. I believe that whatever peace means for us, it comes from the same source, in which we are united. If we can recognise this source in others we can liberate the flow from this source in ourselves.

Curiously looking at the interconnected struggle and at the potentials to connect different interpretations of peace, the project Friedenswirkstätte was born: a safe, welcoming space for connection where refugees and non-refugees can come together to deal with our own involvement in the fundamental struggles of life, to witness our potentials for peace and to co-create transformation. Especially, the potential for peace of refugees should get a space to be witnessed and to unfold, twisting the emotionally charged image of refugees as messengers of war and terrorism. Throughout the project it became clearer that what we are doing is creating synergies: moving beyond the ‘us’ and ‘them,’ moving beyond a helper and receiver relationship, in order to create a shared culture of peace.

Supported by a large network, we sent out an open invitation in January 2017. We called for those who want to contribute to peace, especially people who fled war to live in peace. More people than we could host answered this calling. A big hosting team, including a dialogue facilitator, translators, moderators and a child-carer, welcomed 35 people from seven countries in our first meeting. The beginning was dedicated to tuning in with each other and with our interpretations of peace, for example through Theater for Living games, experimental methods and circle dialogues. Feedback and new diverse hosting team members trickled in, which helped us to design the following meetings. Three more Friedenswirkstätte-meetings were held, each lasting half a day and picking up on emerging topics. After the first meeting, part of the shared time was also dedicated to gathering and manifesting ideas on future action for peace. Within the hosting team we found it also very important to avoid pressure to perform and to give the evolving culture of peace and the needs and information popping up in the moment the space that it deserves.

The moment a young Iraqi woman was drawing symbols of the families of peaces on a paper and explained their meaning to me, I felt glad about my decision not to give any theoretical input within the Friedenswirkstätte, unless the need arises. The kind of peace education happening in this project was about connecting people to elicit knowledge, about giving the knowledge vehicles to be expressed and received. Apart from the knowledge and the resulting transformation within our relations to ourselves and each other, it is the experience of dialogue that allows for carrying the practise of dialogue into one’s own networks.

The Friedenswirkstätte in Vorarlberg ended in July 2017 yet will continue with projects initiated by participants, for example a multilingual radio project. The experience to co-create with these wonderful people and the great resonance from partner initiatives fills me with courage, that together we can let synergetic, beautiful and joyful alternatives to an ‘us’ and ’them’ and to a one-sided integration approach flourish.

On the two occasions I was here I noticed that there are very different interpretations of peace. For many, peace is the absence of war, but there are different forms of peace. For me it also means being satisfied with oneself and that there is peace between religions. Peace doesn’t only depend on whether the system is warlike, but also on our relations to each other, for example had there been no peace between black people and white people or in Iraq between religious groups. Peace also depends on
accepting others. And I see that we all have our own thoughts on this topic. We have all gained something from the thoughts we shared here.

With Vindex association, I work a lot with people in need, also refugees. Often, they have problems and I am supposed to solve them. The Friedenswirkstätte was unique for me, because we were really on eye-level. Our stories are different and many here have gone through much harder times than me, but here we meet as humans and on this level, there is not much that separates us anymore. No matter where we come from, we can laugh about the same things. I hear that what we are doing here is experienced as an important form of peace work and that we want it to continue. I wish that we will not only wait for a new Friedenswirkstätte to emerge, but that we share the vibration we experienced here with other people in our networks.

Peace has many faces. There are countries where peace prevails and others, where there is no peace. For example in Somalia or in other countries in Africa it is not easy to let peace grow. By studying the causes of unpeaceful conditions in different countries, we will find different reasons: economic conflicts, power struggles, clan conflicts and many others. If we want to build peace we should look at how peace is built in different countries and how we can create peace for ourselves – just as we did in the Friedenswirkstätte. I may wish for peace all people over the world, but I cannot imagine that.

The Friedenswirkstätte has connected people from different continents, who currently live in Vorarlberg. It was a very beautiful experience to exchange, to gain completely new impressions, to share laughter and sadness. I especially liked when we created a mandala together and the dialogues have shown me, with how many different points of view we can look at a question. It is beautiful that
we can enrich each other!

I am a teacher and in the Friedenswirkstätte I have learned at least as many helpful methods as in my pedagogic training. The process and the encounters were beautiful, funny, touching and inspiring. I enjoy it very much to keep on working together in the radio project. 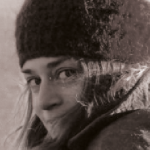 Julia Felder is a Theater for Living facilitator and radio journalist. She lives in a tiny house in Vorarlberg (Austria) and develops and facilitates local peace projects. She works with several grass roots initiatives (e.g. Friedenskraftwerk Vorarlberg, Internationaler Bodensee-Friedensweg, Proton – das freie Radio) and stimulates synergies between them.