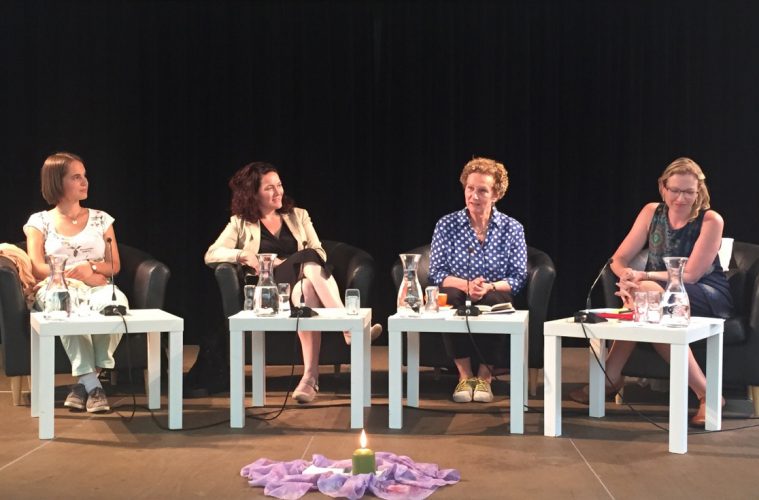 Vera Grabe in Innsbruck (second from the right), photo by Adham Hamed

Arms and Education for Peace

As a daughter of a family of German immigrants to Colombia, Vera Grabe Loewenherz was one of the founding members of the M-19 Guerrilla Movement, the second largest guerilla group in Colombia after the Revolutionary Armed Forces of Colombia (FARC). Founded mainly by students in 1970, the M-19 Movement aimed for a popular democracy, not without making use of armed activities. Vera Grabe Loewenherz fought in the rank of a commander until the final demobilization of the guerrilla group in 1990. She then became a member of parliament. Later she gained her doctorate in Peace and Conflict Studies in Granada and until today has been an activist for peace education in Colombia.

Many Peaces Magazine: What has motivated you to engage in different forms of activism?

Vera Grabe Loewenherz: I think my family environment and education made me sensitive towards social differences which are significant in Colombia. There has always been poverty and injustice. Teachers had quite an impact on me. All of this shapes your perception of the world and determines the way you choose to go, which paths in life you take. I am part of a generation that was searching for possibilities to engage. This was possible at university but also through my engagement with theatre. Furthermore, I got involved in alphabetization programs in different communities. However, I soon realized that was not enough for me. I wanted to do something more political. My environment offered me the possibility to actively become part of the revolution. Che Guevara was our ideal. The Cuban revolution gave us an example of heroes.

The idea of revolution was very central for you?

Indeed, the revolution has always been there. A central year for me was 1970, when the movement was first triggered, but the real guerilla movement started in 1974. The 1968 movement in Germany, which I experienced as I lived in Hamburg for a while, had a great impact. Of course, lots of topics were discussed there. However, this to me was not a real revolution. It was just talking about a revolution. When I returned to Colombia I wanted to serve the people and really work for change.
In this regard, M-19 has always searched for possibilities to make a proposal that is close to the realities of the Colombian people. And so, in 1979, we talked about socialism á la Colombiana. This then changed and we claimed that the struggle was just about democracy. We broke with our initial idea in a way. Colombia at that time had a rather undemocratic two-party system and we tried to offer an alternative.

How did your political work develop in the course of the 1980s?

Well, I spent some time in jail during that time. A few comrades, however, occupied an embassy to demand our release. We had several such operations: For example, we dug a tunnel to break into a military camp. The government responded with a big wave of repression — not only chased us but also authors, housewives, human rights activists and artists. They arrested, interrogated and sometimes even tortured them. Neglection of human rights became a big topic during that time. The leader of our movement then found that it was much more important to focus on freedom instead of socialism, like the other leftist groups did during that time. This of course was considered treason by other guerilla groups.

Was there a consensus for such steps amongst the members of the guerilla movement or was the political position divided?

Sometimes there were conflicts but we always discussed a lot. M-19 always fostered a culture of dialogue. Despite the clear hierarchical structure, there was always a strong attempt to talk about things.

Can we say that your political strategy changed at that time?

Indeed, for a certain amount of time we had primarily been an urban guerrilla, but then we also developed rural units. We always enjoyed a large degree of sympathy from within society and aimed at enforcing a national amnesty, to engage in a national dialogue. Therefore, we conducted a number of quite spectacular actions such as hijacking an aircraft to fly weapons into the jungle. Sometimes we were like heroes who do everything wrong: like landing the hijacked aircraft in a river in the jungle, where it sank. In 1984 we had a first peace process, a direct result of this war for peace. It was a short process with a national dialogue, but this failed completely because we were asked to lay down our arms and of course this was absolutely not an option.
Then there was one operation that went terribly wrong: the occupation of the palace of justice. Our intention had been to show the world that the government had broken the peace process, but the military reacted and many people died there. Both our comrades and the people who worked there. I think this in a way constituted a turning point towards peace.

Can you explain why this was a turning point for you?

Because after this operation people told us, “we support you but this needs to have an end”. Also during this time paramilitary groups started to emerge. We called this period “the dirty war”, because everyone was fighting back then: the paramilitaries, the guerrillas and the state. In the midst of these dynamics a kind of peace movement started to emerge. Our special capacity was to listen to people, also friends, who told us that we could not continue with the armed struggle while counting on their support. They said, there must be a different way out.
In 1989 we had an internal referendum, in which we decided to lay down our arms. Almost everyone was in favor of this step. There were only two votes against this choice. Claudio Pizzaro, our commander, told us, campaneros: “We need to jump without the security of a net. We need to take a risk. We do not know what will happen but returning is difficult. We need to find a way forward and that is peace.”

What did this step into uncertainty mean for you on a very personal level?

Liberation! The final three years I had spent in hiding in Bogotá. Since it was difficult for me to hide due to my extraordinary hair, I had to hide all the time. You want to change the world but then the only thing you end up doing is to protect yourself by hiding somehow. I have heard that some people perceive peace as a great frustration but for me it was a big liberation indeed. We laid down our arms on March 9th. Two days later I had been elected as a member of parliament.
Imagine, for the FARC it has taken 28 more years to come to this turning point and now you see the results: the people do not want them anymore, because the war has become so terrible. Back then the people welcomed us like heroes. I did not run an election campaign and yet I was elected.

Have there been other turning points for you since then?

After we lost the elections of 1994, I went to Spain as a diplomat and then studied Peace and Conflict Studies at the University of Granada. There I realized that peace is so much more than just a signature and not just politics but that it is also a possibility to think differently. I have later returned to Colombia to found and join the Observatorio para la paz. I still work there today.

Vera Grabe Loewenherz (*1951 in Bogotá, DC, Colombia) is a Colombian peace activist, former Member of the Colombian Parliament and former guerilla combatant within the Colombian M-19 Movement, which she co-founded.

This text is a translated, shortened and edited version of an interview conducted in the framework of Adham Hamed’s dissertation research on the topic of turning points in peace processes.