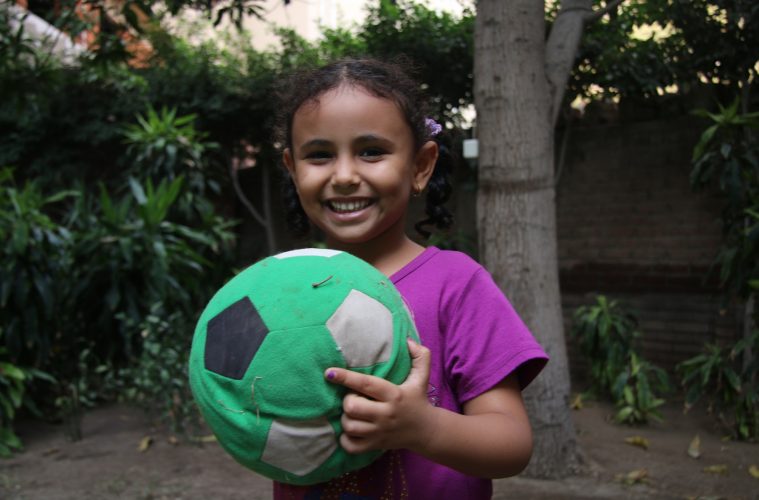 She hid behind her father’s legs. I could only see her big brown eyes. “That’s Fatma,” said Yousef, our new doorman who lived next to our new apartment in Cairo in a small windowless room together with his family. Fatma is his little daughter. “Fatma is afraid of other people,” explained Yousef. “It’s good that you moved in the apartment next to us. Fatma and Malak can play together one day.” Two little girls, two families, and the beginning of a beautiful friendship.

It was my husband Salah who introduced the girls to each other. “Go and play with Fatma,” he told Malak. Off she went to Yousef’s little room where he lives with his wife Shaimaa, Fatma and baby Heba. They share one big bed, a small kitchen, a bathroom, and a TV on a shelf. Since I arrived in Egypt more than nine years ago, I have not been able to get used to the big gap between the rich and the poor. It breaks my heart when I see how many rich people spend an unbelievable amount of money on weekly manicures, perfect haircuts and expensive club memberships while a family of four people has to share a bed.
Malak was two years old when they met, Fatma one year older. Since then, the girls have been best friends. They laughed, screamed, ran, solved puzzles together, fought and hit each other, cried and hugged. I was very proud to tell people that Malak plays with our doorman’s daughter. It was just a good feeling, because in this way we could raise awareness against the social norms that usually prohibit engaging with the doorman’s family. Sometimes, we shocked other people with our new friends. Fatma has taught me so much about ethical behaviour, about the thread of injustice and about paying attention to things in their particularity. Suddenly I have seen the big gap in the Egyptian society and started to be more and more aware of the advantages and the disadvantages in our daily life when you belong to a certain class. It was like a huge and broken puzzle for me.
When I became pregnant again, Yousef and his wife helped me a lot, while the girls played for hours in their room. Baby Salma was born at home. Even while I was in the last stages of labor, Malak was with Fatma next door. There was no way we could separate these two girls.

In the last days of summer, Yousef told us he had begun searching for a kindergarten for Fatma. Alarm bells rang in my head. I knew that average kindergartens in Cairo cost 2,000 pounds or more, which is a lot keeping in mind that the average income in Egypt is around 1,500 pounds. I did not even like most of them myself. When I visited kindergartens I have mostly seen small children sitting on chairs, repeating words written on a flashcard. They had to fill out so called “working-sheets” and were forced to do something else every half an hour: puzzling, painting, singing. Everything was according to a strict schedule. It was like the military. How awful would a kindergarten for fifty pounds be, I thought to myself. “It is very common that children are getting hit, or even raped, in the worst case”, my husband told me. “Or they are just thrown in a corner where they can play with broken plastic toys”, he continued. No, I thought, not for Fatma. Not for our helpful neighbors.

I wrote a post starting an initiative for Fatma. I had a clear vision: Fatma having the same chances in life as Malak.

Sitting on my laptop, I felt inspired to write a short post on Facebook. It just spilled out of me. I wrote a post starting an initiative for Fatma. I had a clear vision: Fatma having the same chances in life as Malak.
I called the initiative “I’m free to learn” – inspired by the book “Free to Learn” by Peter Gray. The book is a masterpiece, arguing against imprisonment schooling and explaining the importance of free social play. I asked my Facebook followers if anyone was willing to donate money for Fatma, so we could save her from ill-treatment in a cheap kindergarten. I received messages on the spot. Surprisingly, even the manager of the Montessori-Kindergarten that Malak attended contacted me, scheduling a meeting for the next day. “I’m curious about Fatma,” Silvia Makram said, when we met in her office. She asked me a few questions, and it was obvious that we were both very moved by what was happening. “I want to see her. Can you bring her tomorrow?” I felt I was losing my balance, in a dream state. She continued, “I have been thinking for months about admitting an impoverished child into our kindergarten. I know that Maria Montessori would be very happy about that.” We both had tears in our eyes. That afternoon I went to Yousef and told him what had happened, delivering the good news that beginning from the very next day, Fatma would be attending the same kindergarten together with Malak. He and his wife were so happy.

Time passed by so quickly. I have experienced one of the most moving things in my life, seeing a child blossoming like a beautiful flower. Two years ago, Fatma was just one of millions of poor children in Egypt. Now, she can speak a few German words and is counting in English. She knows how to climb, she is not afraid of a slide anymore. She knows how to pay the taxi driver, and waits for her change. She feels responsible towards others. She is polite and has a pure heart. I was surprised with the change she went through. Suddenly Fatma’s self-esteem grew, she was confident. It seemed that everyone loved her. I could see how Fatma opened people’s hearts when they whispered in my ears, “I want to donate also.”

Fatma has taught me so much about ethical behaviour, about the thread of injustice and about paying attention to things in their particularity.

It was a big change in our lives and did not only change Fatma and her family, but also many things inside of myself. I experienced how many capabilities we have if we just hold our hands. Sometimes when I have looked into Fatma’s house, I have seen her mom teaching her how to read and write. “It’s very important for a girl to know these things”, her mother told me. I smiled. Fatma’s mom and I shared our duties. We were like a little family – no matter the colour of our skin, nationality or class.

As it was a big challenge for me, it was also a big challenge for Fatma’s parents. Suddenly a stranger stepped into their lives and took the hand of their child. We crossed class borders something that is very unusual in Egypt. Since the day I moved here, I have experienced many rich people making fun of the poor and the farmers, some even treating them like animals. I found out about the common understanding amongst many rich people of prohibiting their own children from playing with those belonging to a lower class. Unfortunately, there are not a lot of places where children from different backgrounds can mingle.

I think, you can develop the world when you open up your hearts.

“Be aware of the fact that some people in our street might laugh when they see you walking with Fatma and Heba”, my husband told me. “They do not understand why you take care of them. For some people Fatma and Heba are just dirty children and these people might think you are totally insane”, he continued. I knew how proud he was deep inside himself that his children were playing with Fatma and Heba. Like me, he hates the division of classes. I think Immanuel Kant and Karl Marx were right when they said that the key to peace is the growth of some form of solidarity between people or classes of people. I think, you can develop the world when you open up your hearts.
After two years of solidarity and friendship, Fatma and her family left the house. Heartbroken we had to say goodbye to them. They moved from Cairo to the Upper Egyptian city of Aswan. Back to their family. Fatma and Heba are going to school there. After the pain of loss, there is silence around us. Nobody can predict their future. But one thing I am totally convinced of: Fatma and her family will always stay as beautiful and warm-hearted as they are and their story might raise awareness in Egyptian society. Perhaps it will influence people’s way of thinking concerning class divisions and encourage more inclusion in the future. 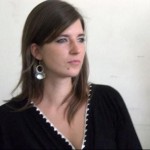 Kristin Jankowski is a German writer who lives and loves in Cairo, Egypt. After being a video journalist in Berlin, she has worked as an editor for the Goethe-Institut in Cairo and as a freelance writer for different German and Austrian newspapers. She is the mother of two young girls.