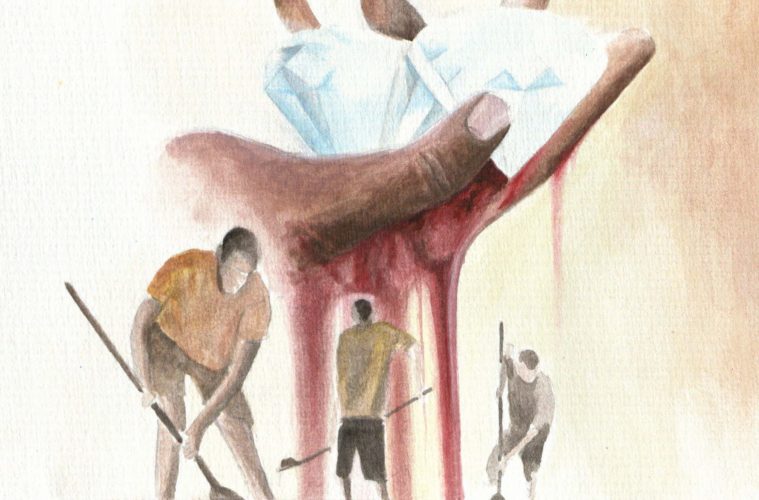 Daniel Shematsi takes a sip of his tea with milk he has just ordered in a well-situated hotel in Goma, the capital of the province North-Kivu in the East of the Democratic Republic of Congo. Protected from the sun, on a table at the banana-leaf-roofed bar, the young man tries to put his understanding and practice of journalism into words. Having waited for the noise of the daily circulating UN-helicopter to pass, he looks up from his cup, and says with an almost surprisingly determined voice: “For the sake of peace, we are obliged to pass the message in the radio. Whatever it costs.”

Daniel is the director of Radio Masheben FM, a communal radio station in Masisi, a territory in southern North-Kivu. Its capital of the same name is the next bigger city from Goma, a three hours ride on a motorcycle on muddy streets where cars and busses rarely pass. In the provincial capital Goma now, he participates in a training on finances provided by GIZ, the German Society for International Cooperation. International organizations conduct many such seminars in the North-Kivu, often targeted at journalists. In such settings, local journalists are being educated and further expected to disseminate newly acquired knowledge through their radio programs.

While the added educational value might motivate journalists to participate in such workshops, it is not the only factor. Many see in the workshops a form of funding in a largely underfunded environment. A number of underlying reasons may illustrate this point.

‘Publi-reportages’ are partly journalistic pieces produced by the international organizations about their own activities in the troubled region.

Firstly, accommodation, food, and access to Internet are provided. This is an advantage for the journalists who are mainly working without regular payment. Secondly, in the North-Kivu the so-called ‘frais de transport’ have become a common practice. These ‘transportation fees’ are meant to cover the participants’ expenses, yet, in practice, often exceed the actual expenses by far. Moreover, all participating journalists receive the same amount, whether they are local residents or have had a long journey. And thirdly, such workshops often result in a diffusion of ‘publi-reportages’, which are partly journalistic pieces produced by the international organizations about their own activities in the troubled region. Local radio stations get paid to air this publicity without labelling it as such but by presenting it as informative journalism. Often, the content of such productions is in line with the aim of the journalists to engage in activism for peace and development. Still, Patrick Kiroha Sugira, a journalist from the territory Rutshuru in Southern North-Kivu, is critical towards these practices: “It is now the international organizations that dictate us journalists. But it is where we get paid at least.”
The interdependence between international organizations and local journalists in the East-Congolese province is hence complex – and often undermining journalistic standards.

What are these journalistic standards?

“What you have to know is that journalism in Masisi is not journalism in Goma. It’s not the same journalism, and it’s not the same as in Rwanda, France or anywhere,” Daniel says. While staring with sad eyes into his cup he pours four spoons of sugar in, and adds: “In our zone, journalism is another reality. It’s really another reality.”
This other reality includes the constant feeling of being in danger, not only as a citizen in a war-torn area fearing nightly attacks of heavily-armed rebel groups; but additionally, as a journalist, targeted by whomever they report on: politicians, the military, church members, citizens, or rebel groups. Daniel recalls the day when armed men showed up at his home, his wife and his barely one-year old daughter sitting on the bed, witnessing how their loved one is being threatened with death: “I was told that if I continued reporting on a certain issue, they would kill me.” It was not the first time Daniel needed to give up journalism for some time and leave Masisi to calm the situation down before restarting fighting for peace with his voice in the radio. The only solution Daniel and his colleagues have to face the “daily bread of danger and repression” is to work even harder along the international standards of ‘objectivity’ and ‘neutrality’.

“I was told that if I continued reporting on a certain issue, they would kill me.”

But these are hard to meet when it is your friends who are being tortured, your country’s system that is not protecting citizens like yourself, and the politicians supposed to represent you but manipulating voters for personal enrichment. As if this was not yet enough, access to information, a crucial part for objective reporting, is often lacking. So-called ‘direct’ information is only accessible in Goma where politicians meet, international organizations are based, and press conferences take place. For most journalists like Daniel, it is not possible to travel there regularly, hence they rely on what they call ‘indirect information’ which they access through other radio programs or phone calls. The network is often not stable, however, and Daniel only has access to Internet on some lucky days in his studio in the center of Masisi. Also, other basic infrastructure such as computers, recorders or cameras are often not available. Anderson Mbula who works as a journalist in the Western part of the North-Kivu, Walikale, summarizes: “Actually, for the whole aggregate of technology, we can’t access it. We don’t have the means to get any technical material or infrastructure that would enable us to do a good job. So, we just try like this.”
Daniel tries to apply international journalistic standards that he defines along the big terms of ‘objectivity’, and ‘professionalism.’ “But the reality here sometimes forces us to do things differently than others as we also need to adapt to the environment we live in,” he explains. He, once again, stares into his cup and, as if speaking to himself, continues: “And we also have to survive…”

Why don’t you give up on journalism?

There does not seem to be a quick fix to the financial issues deriving from the absence of any formal financing for journalists in the North-Kivu, nor to the problematic legal basis of journalism and the media in the Democratic Republic of Congo with outdated laws from 1981. Working under constant repression and danger of life on a daily basis or unjustified imprisonment, and the appalling lack of equipment and access to infrastructure, technology and information sum up to problems that affect their profession. Independency gets lost and young people affiliated with some politician become “journalists by accident”, instrumentalized to diffuse propaganda. With all this in mind, I ask Daniel if he ever thought about giving up on journalism. “No, never. I can’t just stop helping my community.” He sees himself as a sensitizer, active on ground for the sake of peace, which needs verified information and education to which he contributes through his radio shows.

Despite the theoretical differentiation between journalism and activism, in the North-Kivu, the borders between those two concepts become blurry. On the one hand, the dissemination of verified information and educating the public are journalistic characteristics which not forcibly need to be interpreted as political instruments to answer to grievances or to express a will of change. On the other hand, taking into account the local context of constant danger and lack of protection from the government, Daniel’s belief of contributing to a peaceful development in Masisi and beyond through speaking on the radio can be seen as a counterpart to passive acceptance of the situation – which is a defining aspect of activism.

The question of the media in North-Kivu has been abandoned a long time ago. Let’s not abandon the people, please.

But after all, taking one step back is crucial. Perhaps a clear distinction between journalism, activism and development aid is not the most important finding when researching in the North-Kivu.
A couple of days after the conversation over the milk-sugar-tea mix in the hotel in Goma, Daniel sends me a picture of him, surrounded by children, sitting on a wooden bench on a hill overlooking Masisi. From that perspective and with the smiling faces staring at me from my screen in Goma, the North-Kivu suddenly seems to be at peace for that very moment. No matter if activist, journalist or development aid receiver, above all, Daniel is striving for peace and using the journalistic tools he has. He walked two days through the bush to reach the village of these children to tell their story of being denied of school access.
Back in Masisi center, his network is back. Just as he is sending the picture he calls me, asserting: “The question of the media in North-Kivu has been abandoned a long time ago. Let’s not abandon the people, please.” 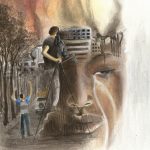 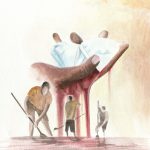 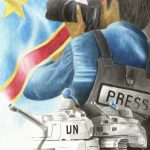 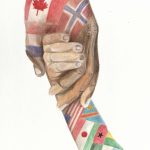 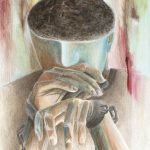 When I had the chance to meet Daniel and interview many of his journalism colleagues from the entire province, they were all going back to their home territories to pursue what they interpret more as their mission than their profession of journalism. However, by publication of this article, several of them had to flee in the meantime, amongst them Daniel who left his territory Masisi in the beginning of 2019 to seek refuge in Goma where he still tries to produce journalistic work.
This article is built on interview-based research conducted during a two-months stay in Goma, North-Kivu, in the end of 2017. The findings of this research have been transformed into a Bachelor thesis, titled “Journalists in the North-Kivu: Between Journalism, Activism, and Development Aid”, handed in at the department of African Studies at Leipzig University in Summer 2018. 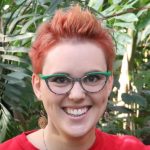 Louisa Esther Mugabo is an Erasmus Mundus MA student at Swansea University, specialising in War and Conflict Reporting. Since her undergraduate studies in Political Science and African Studies in Germany and Spain, her work has focused on the Great Lakes Region of Africa, in particular Rwanda, the DR Congo and Burundi.