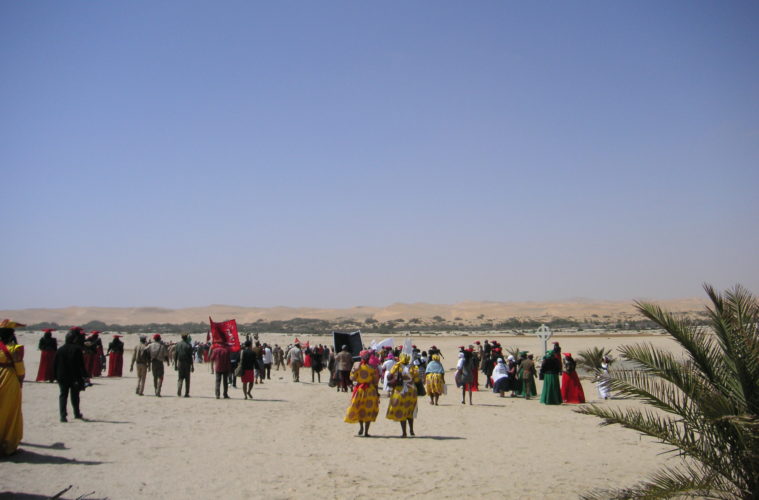 Dreams of War and Justice

Between 1904 and 1908, military troops of Imperial Germany committed a genocide against the Herero and Nama in Namibia. Jephta Uaravaera Nguherimo, Herero himself, reflects on war and genocide, the transmission of transgenerational trauma and his people’s struggle for justice today.

Ombuyovakuru, Namibia. As children, we would sit around the fire with our Great-Uncle Tjambu and beg him to tell us stories about the past. At times, he would tell stories about the origin of the Herero people and our belief in God, respect for our ancestors and our love for cattle. Occasionally, he would doze off while telling a story. One of us kids would nudge him and shout at him to go on. Then, he would abruptly awaken from his nap and exclaim: “What? You mean the The War of Nil Vier?” (Referring to the war of 1904).

We children would laugh and crack jokes that he was not well in the head. He had good stories, but we knew something was off with Great-Uncle Tjambu. Grandpa would remind us that he had been involved in the “Great War”. He would say it as if we were supposed to know about the Great War. Grandpa was a strict disciplinarian, therefore we never dared to ask about this war.

your denial and delay
re-traumatize, resuscitate
the deep wounds of genocide
for generations i have identified

Accounts of the War

One of the most important occasions in Herero culture is a wedding. When I was a child, people would hire top-notch dancers and orators to sing Outjina and Omihiva, traditional music and dances performed by women and men respectively. The lyrics of these songs always referred to the mysterious people who fled to the east with their cattle. The songs also referred to Botswana and a person with a big hat who fled on a horse. In fact, the Herero people refer to Botswana as the place of people wearing big hats. Much later, I realized that the person with a big hat, in some of these songs, was Chief Samuel Maharero, the Herero Chief who had fought in the war against the Germans in 1904 and had finally escaped to Botswana after the battle of Waterberg.

I mention those things because they were my earliest introductions to the Genocide of 1904-1908 perpetrated against the Herero people by the government of Imperial Germany. I have great respect for my grandparents and parents for the extraordinary efforts they took to protect us children from the transgenerational trauma wrought by the Genocide. I grew up not knowing much about the genocide, because it was not part of our school curriculum. The small amount I did learn came from the stories told as part of our oral tradition. I do not know if the community made a collective decision to protect their children from the trauma and shame of the genocide. However, in retrospect, their effort was somewhat successful.
To be clear, I am not saying our parents never told us anything about the war of resistance against German colonialism in Namibia. They told us of Herero heroism, the battles they won and the places where they were victorious against one of the world’s great super powers of the era. They would tell us about the guerilla tactics they then used to ambush the German troops, the bravery of the warriors, and how they confiscated German weapons and uniforms to disguise themselves. Yes, through Omihiva and Outjina lyrics and oratories they would tell about those military accomplishments and sometimes critique the warriors’ failures to take advantage of the German troops’ weaknesses.
What I mean to point out is that during their storytelling about the 1904 war, Herero men would never mention the genocide. They would only speak about the war of resistance. In fact, only recently has the term genocide been used in reference to these events. For a long time, Herero people were silent about the topic and had no word for genocide. Instead, they would describe what happened to those who were captured and taken to concentration camps, as well as what happened to those who fell in the hands of the German soldiers during the war. Years later, I understood why our Great-Uncle Tjambu would startle from his sleep and yell: “The war of 1904!”

In 2004, I decided to interview my grandmother about her parents’ experience from 1904 to 1908. I can recall how her tone and demeanor changed when she started talking about her parents’ lives after they had been captured by the German patrolmen and taken to the concentration camps. I could sense her pain as she avoided eye contact with me and the camera, as if to spare me from her trauma. I prodded her to tell me more. At one point, she required that I turn the video camera off and continue the interview later, knowing well that I would return to the USA within two days.

Another time, I asked my grandmother and her sister: “What if the German people apologized for the genocide they committed? What would you do?” They both answered in a typical Herero manner: “If someone apologizes, then they have apologized. What are you going to do other than move on?” However, my great-aunt added another twist to her answer: “What can we do? We are weak and unable to demand the return of what we lost, our land. If they could give us our land back, it would be a good gesture in addition to the apology.”

Her answer left me with a sense of guilt and a self-imposed sense of responsibility to devote my life to the struggle of restorative justice for my people. In a way, her feeling of powerlessness empowered me to take action and involve myself in the struggle for justice, a cause to which I have devoted myself for the past sixteen years. The two poems below represent my people’s thirst for justice and their aspirations, which include an apology from the German people. I know now that my conversations with my grandparents, my great-uncle’s “dreams” about the war of 1904, and the messages embedded in the Outjina and Omihiva about the mysterious man on horse who fled to Botswana, were part of the broader, intentional way of the Herero people to transmit transgenerational trauma of the Genocide of 1904-1908 to their children of my generation. The poems above are about their unheard voices, their pain, and my own cry for justice. They are a selection from my self-published book “unBuried-unMarked:The unTold Namibian Story of the Genocide of 1904-1908: Pieces and Pains of the Struggle for Justice”.

how can those who are dead still exist
and demand justice and insist
oh yeah, genocide planted the seeds
that germinate, regurgitate and strangulate

how can those who are dead still exist
to demand justice,
restoration and reparation
the judge must dismiss
oh no! if dismissed justice will be amiss 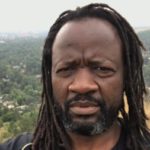 Jephta Uaravaera Nguherimo was born in the village of Okanjokomukona, Namibia, in 1963. He was a political refugee during Namibia’s colonial Apartheid era. In 1987, he was awarded a prestigious scholarship from the Bishop Desmond Tutu Scholarship Fund to study at the University of Rochester, NY, where he earned a B.S. in Philosophy and International Political Economy. In 1997, he earned an M.S. in Labor Studies from University of Massachusetts-Amherst. An accomplished labor negotiator and activist, he is the co-founder of the OvaHerero, Ovambanderu and Nama Genocide Institute and the author of a book of poetry, unBuried-unMarked: The Untold Namibian Story of the Victims of German Genocide between 1904 -1908. He resides in Kensington, Maryland, USA.