Palestine: Cross-cultural Identity Under Occupation – The case of persons from cross-cultural backgrounds living under Israeli occupation in the Palestinian territories

My thesis seeks to explore the identity and belonging of cross-cultural individuals living under Israeli occupation in the occupied Palestinian territories of the West Bank and East Jerusalem. The idea stems from my personal interest in the topic of cross-cultural individuals who grew up between two worlds, addressing the experience of not fully belonging to the society, country or culture of their parents. Using the working definition of Pollock and Van Reken (2009), a cross-cultural kid (CCK) is understood as “a person who has lived in – or meaningfully interacted with – two or more cultural environments for a significant period of time during developmental years.” Specifically, in this research I work with cross-cultural individuals who have spent a considerable amount of time during their developmental years (from birth to the age of 18) living in and interacting with different cultures.
Having discovered under-explored territory in the literature and conversations around identity and home, I focus my topic on cross-culturalism that includes the immigrant, refugee, cross-racial and cultural all under the same umbrella, rather than adding to the abundance of literature that already looks separately at these subcategories constituting cross-culturalism. In order to theoretically and practically explore the figure of the cross-cultural individual, I engage in a broad literature review of the topic linked to the historical genealogy of Israeli occupation, the Arab-Israeli conflict and the Palestinian refugee issue and analyze one-on-one semi-structured interviews. I am interested in how CCK’s personally experience identity and belonging in a cross-cultural setting, aggravated by military occupation.

To conclude, I would like to draw from an excerpt from my thesis that I believe captures my experience as a researcher: “Growing up, I have often considered my struggle with identity crisis as a constant attempt at finding balance between my Russian identity and my Palestinian identity. After this study, I realized that there is no such thing, that identity cannot be compartmentalized between Russian, Palestinian or any other element, but rather that identity is whole and that balance is a constant work-in-progress.” 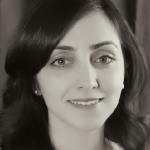