Sophie Friedel is an inspiring scholar of Peace and Conflict Studies. Recently she finished her first book, The Art of Living Sideways, in which she elaborates on the relation between skateboarding and transrational peaces. We talked to her about this unique piece of scholarship that outlines a concrete practice of elicitive conflict transformation. A Conversation with Sophie Friedel about the Art of Living Sideways. The interview was conducted by Adham Hamed.

MPM: Sophie, you have just finished your first monograph, The Art of Living Sideways. Could you perhaps tell us a bit about your personal reasons for writing this book?

SOPHIE FRIEDEL: Yes of course, with pleasure. Well, actually the initial start for this book was my MA thesis. However, my drive behind the thesis and then this book was twofold. On the one hand, it came from my love for skateboarding. On a practical level the movement of skateboarding gives me a sense of inner peace and with my text I wanted to understand how exactly this happens. On the other hand, my curiosity for the transrational peace philosophy made me dive into the magic of exploring my inner self through writing. Inspired by elicitive conflict transformation and the transrational turning point in peace politics, which Wolfgang Dietrich outlines in his Many Peaces Trilogy, I see it as an important quality to be self-reflective when working in the realms of peace and conflict transformation. However, the so-called self is a complex thing to understand. Since it is so difficult to grasp, yet so essential in order to become an elicitive peace worker, I had the intuition that I needed to frame peace research in a way that helps potential elicitive conflict workers to get to know themselves better. Therefore, I abandoned the research question in a classical sense and attempted to frame it one way to undertake transrational research, as I explain in the methodology chapter.

In that sense, I understand a transrational peace researcher to be one’s own  research question as much as part of the research object. The purpose behind this method is practicing listening to one’s innermost intuition and awakening the healing capacities inherent to writing as much as conducting academic research. For the book I board a journey where I apply what I know about myself in my research quest to further understand and make sense of underlying relationships between skateboarding and peace. By doing so, I hope I can pass on new information concerning the relationship between skateboarding and peace, as well as inspire my reader to practice the work on the self.

MPM: As a former German mountainboard champion and sponsored rider you were amongst the best in Europe you can look back at a rather successful career. Can you tell us about your path into competitive sports and why you decided to become a skateboarder?

SOPHIE: I am not sure why one part of me decided to become a skateboarder. It is just something that makes living more joyful and happened gradually. I grew up close to the Bavarian Alps where skiing and snowboarding were a wonderful parts of my childhood, then moving to Cornwall I missed the snow. Picking up skateboarding was a logical next step as the movements are similar to snowboarding I suppose.

Back when I was riding competitively, boardsports such as mountainboarding and downhill longboarding was more about the experience in the here and now. Yes we did compete in time runs, ‘boarder cross’ or so called ‘slide jams’ but back then we all had very little money and competition was rather secondary. That’s why I would not call my past a career but rather a time of my life. In fact, in the book I explore the difference of seeing boardsports such as skateboarding as an art or as a sport. On the example of skateboarding I try to capture the expressive art of skateboarding movements. This is a fluid art that is constantly renewed and re-formed in the moment and provides a possibility to express oneself. Understanding the act of skateboarding as an art becomes particularly exciting when taking skateboarding further, especially in the direction of working with conflict transformation. This book marks the beginning of seeing skateboarding movements as path for transformation and there is a lot of room for further research in this direction.

MPM: What is The Art of Living Sideways?

SOPHIE: Again, this is to be understood with a double meaning. The most obvious connotation is rooted in the activity of skateboarding itself. In particular it refers to the action of riding and to the riders who identify with their activity to such an extent that it turns into a form of art. An art that expresses a certain moment and that expands to form one’s life and lifestyle. I further define The Art of Living Sideways as a metaphor that looks at life from the side and as a call to incorporate the perceptions of mind, body and soul. As such, The Art of Living Sideways is to be understood as an embodied process of peace work or even a language that, by including the multiplicity of perceptions, helps us to unfold and transform. Inspired by Gabrielle Roth’s movement-based art, The Art of Living Sideways is a type of medicine that gives us the possibility to reconnect with the body, the mind and the soul.

MPM: You lived in Kabul for a considerable amount of time. The skateboarding project Skateistan seems to have inspired you in your work. What was it that inspired you in Afghanistan and how did that influence this project?

SOPHIE: Uff, that is a huge question! My experiences in Afghanistan spread over a period of three years and gave me a gigantic melting pot of inspiration. Especially the situations where I lost people I loved inspired me to keep on making the best out of living. This influenced my writing in a way that allowed me to share my personal experiences because I know that I too will die sooner or later. Then, coming to talk about Skateistan, the NGO that uses skateboarding as a means for youth empowerment, it inspired me on several layers. First and foremost, working for Skateistan moved me to take up peace studies. Skateistan was revolutionising aid delivery in Kabul and my former colleagues inspired me to improve the development aid strategy of “sport for peace initiatives.”  The kids and wise women of Kabul inspired me to calm the battle I was fighting inside myself and the let us call them “socially-obliged-security-restrictions” encouraged me to speak up. Altogether, the above-mentioned influenced this book project in a way that allowed me to communicate one perspective of the relationship between skateboarding and peace work.

MPM: Can you give us an example for socially-obliged security restrictions?

SOPHIE: With that I am referring to the negotiation of controlling one’s behaviour on a day-to-day basis. It is kind of an inner battle of whether to accept, ignore or break socially accepted norms. Of course this happens everywhere in the world, but in Kabul this negotiation had the unpleasant side effect that ignoring socially accepted rules could result in death or bring people around me in serious difficulties. For example, for women not to look into male eyes, not to touch the opposite sex in public. Also pretending to be different in public and not being able to flow, due to the worry of being inappropriate, results in hiding and not standing one’s ground.

MPM: You are currently training to become a psychotherapist. The therapy sofa seems to be a rather different environment to the streets of Kabul. Is there a relation between your past and present work?

SOPHIE: Yes, in a way it is totally different, yet I find my work very similar. In Kabul my work was based around facilitating spaces that support people to unfold their peace(s) with skateboarding. I now do the same with psychotherapy. They are both equally rewarding. 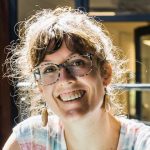 Sophie Friedel is author of the Masters of Peace monography “The Art of Living Sideways. After graduating from the MA Program for Peace Studies at the University of Innsbruck she moved to Freiburg to collaborate with the SAT program after Dr. Claudio Naranjo. She is training to become a Gestalttherapist and founder of the skateboard school “Rollbrettworkshop”, where she teaches the art of living sideways.