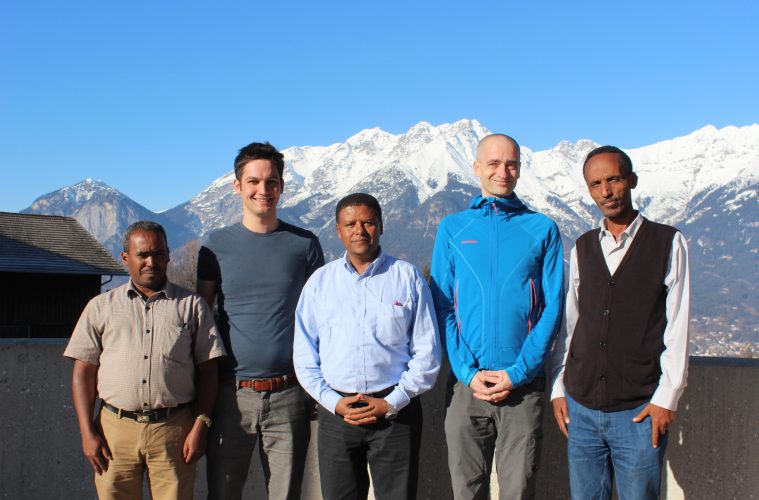 In January the Project Team of the new APPEAR-funded project “Partnership for Capacity Building in Peace and Conflict Transformation”, had its kickoff meeting at the University of Innsbruck’s Unit for Peace and Conflict Studies. During ten days of intense workshops, lectures and detailed project planning, the team members, under the overall coordination of Dr. Gutema Imana Keno from Haramaya University, Ethiopia assessed the status quo of capacity building efforts for Peace and Development Studies in Ethiopia. Besides planning activities, there was also time for team-building efforts, such as a guided tour of the old town of Innsbruck, through which the project team learned about the almost 350 year old relationship between the City of Innsbruck and the University of Innsbruck, which was founded in 1669.

The newly formed team has ambitious aims for the two and a half years of cooperation ahead: First, they will redesign already existing MA and PhD curricula at Haramaya. Second, they will jointly work to strengthen capacities in peace and development education, administration and research at Haramaya University. Third, HU Staff and Students will acquire skills in conflict analysis and peace facilitation, following an elicitive approach to conflict transformation, as has been developed at the University of Innsbruck, and fourth, they will develop a vision and plan for a Centre for Peace and Development at Haramaya University.

Merging Social Science, with findings from humanistic psychology, Dietrich has conceptualized peace as a plural term, suggesting that there are as many interpretations of peaces as there are lived human experiences.

In this initial project phase, a solid understanding for the peace and conflict studies didactics and methodologies at the University of Innsbruck is of utmost importance. To this end the project team was introduced to the Peace Studies MA curriculum, organized in five different modular periods, for which the University of Innsbruck has become well-known internationally within the Peace and Conflict Studies field. Each semester the international group of students start with an interactive online preparatory seminar. This is followed by horizontal teaching formats and approaches to experiential learning. The Military Commander of the Tyrol, Maj. Gen. Mag. Herbert Bauer, introduced the didactics of an excursion week to the project team, in which the students are trained in applied peace work in armed conflicts in the roles of civilian United Nations Peacekeepers, by the Austrian Armed forces, while Prof. DDr. Wolfgang Dietrich delivered introductory lectures into Peace and Conflict Studies to the project team. During these lectures the workshop participants discussed the University of Innsbruck’s innovative approach to Peace and Conflict Studies, elicitive conflict transformation, including at its core a human centered approach to conflict work. This concept was first introduced by US-American scholar John Paul Lederach, who has extensive experience in applied conflict transformation work around the world, and then developed further by Wolfgang Dietrich, the first UNESCO Chairholder at the University of Innsbruck’s Unit for Peace Studies. Merging Social Science, with findings from humanistic psychology, Dietrich has conceptualized peace as a plural term, suggesting that there are as many interpretations of peaces as there are lived human experiences, based on factors such as culture, socialization and psychological influences. A crucial dimension of the Innsbruck School of Peace Studies is an engagement with different experiential aspects of peace and conflict transformation work and research. Each semester students are hence introduced to a different set of conflict transformation methods that are used within the field of elicitive conflict transformation. In this context, Mag. Armin Staffler introduced the audience from Haramaya University to Theatre for Living – a forum theatre method that has been derived from the Brazilian theatre artist Augusto Boal’s work.
Finally, a group of alumni introduced three distinctive alumni initiatives that have emerged from within the active Peace Studies alumni network at the University of Innsbruck: The Peace Studies Fund, an initiative that supports students from the Global South to finance their studies in Innsbruck, the Many Peaces Magazine, a bi-annual magazine focusing on peace research and conflict transformation initiatives inspired by the Innsbruck School of Peace Studies, and the Peace Elicits, a group of alumni that engages in peer-trainings for applied peace and conflict transformation facilitation work.