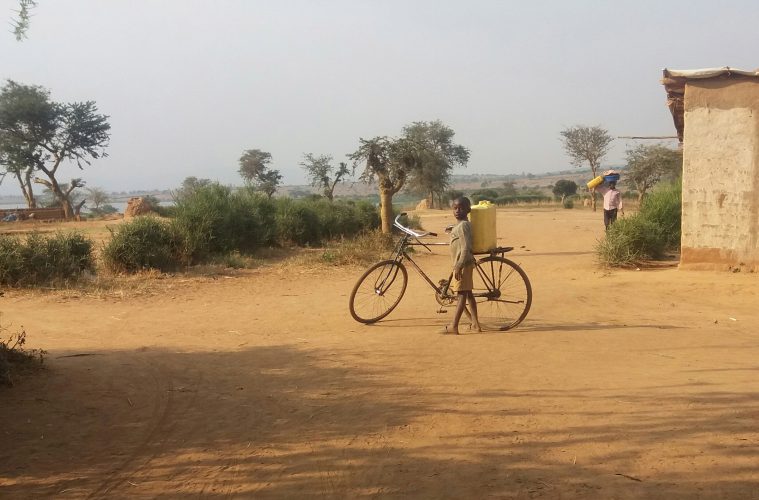 My Days in A Parallel World

In January and February 2018, I travelled to Uganda. Etienne Salborn had invited me to his Social Innovative Academy (SINA) near Kampala to facilitate a workshop on Theatre for Living and guide a group of scholars through their theatrical project. I had also planned to take some time off during my Ugandan stay. Etienne recommended the options of going on a safari; spending time on one of Uganda’s lakes; seeing the last mountain gorillas of the planet; or visiting Nakivale refugee settlement. Although the last proposal did not seem to be a relaxing option, it piqued my curiosity.

Opened in 1958 in southwestern Uganda, Nakivale was established as a settlement in 1960 and hence, represents one of the oldest refugee settlements of the country. Following the United Nations High Commissioner for Refugees (UNHCR), it currently hosts more than 100,000 refugees from Burundi, the Democratic Republic of Congo, Eritrea, Ethiopia, Rwanda, Somalia, Sudan, and South Sudan, on 184 square kilometres. [1] Interestingly, Uganda’s commitment to hosting refugees actually dates back to the early 1940’s with the reception of numerous refugees from Poland. However, its serious involvement in the matter started in 1955 when circa 80,000 refugees from South Sudan came in. This continued in the late 50’s with the arrival of Congolese and Rwandan refugees. Since then, Uganda has received thousands of African refugees, especially from the neighbouring countries. The setting up of settlements has been a way for the country to better deal with the high number of refugees and more easily justify access to international aid. [2] Settlements, in contrasts to camps, are of a more permanent nature, having schools, hospitals and brick buildings. There, refugees are expected to sustain themselves by cultivating the land, growing their own business, trading with the locals, etc. However, living isolated from mainstream society, they have their freedom inherently constrained. [3]

When Etienne mentioned Nakivale while we were skyping between Austria and Uganda, I could hardly picture what I would concretely do in a refugee settlement. Once at SINA, I heard about Opportunigee, the first self-organised social entrepreneurship hub of the world located in a refugee settlement. In 2016, three former SINA scholars from Congo had indeed decided to reproduce the model in their own life context, Nakivale. As the name indicates, Opportunigee offers refugees a space wherein they are empowered to create opportunities for themselves by transforming their wounds into strengths. In a safe environment, they are provided tools to set up enterprises, improve living conditions, heal trauma through expression, develop artistic skills, and the like.
Intrigued, I was wondering what an oasis of creativity in the restrictive conditions of a refugee settlement might resemble; I had a strong desire to work with the scholars at Opportunigee. In this spirit, I contacted one of its founders, Patrick Muvunga, a Congolese artist, and offered to facilitate a session on Intuitive/Creative Writing and Bodily Expression. He heartily welcomed the idea and a few days later I was on the road to Nakivale situated roughly 250 kilometres away from SINA. In practice, this meant being compressed in a matatu (minibus in Swahili) for a couple of hours before reaching the locality of Masaka, then taking a bus to reach Mbarara, and finally squeezing into a taxi for another two hours to drive into the heart of the refugee settlement. Altogether that is a six-hour journey, at best. Though bone-crushing, it is fascinating to observe how every unoccupied corner of a transport vehicle can be used to fit either a person, an animal, luggage, or food.

I was struck by the remoteness of the settlement, exacerbated by the single and only road leading to this unique destination. In other words, nobody passes the settlement “by coincidence”; one goes there consciously.

Beyond the checkpoint into the settlement, the car windows were immediately closed as we entered an opaque veil of dust. My first impressions of the settlement were those of a desert, scattered here and there with some thorny bushes and cacti, and a few clay houses, in front of which people, coming out of nowhere, were staring at us. I was struck by the remoteness of the settlement, exacerbated by the single and only road leading to this unique destination. In other words, nobody passes the settlement “by coincidence”; one goes there consciously.
In this first trip to Nakivale I was accompanied by Julia Eisenrieder, a German volunteer whom I was to travel with afterwards, and Guilaine Bayubasire, a Congolese SINA scholar, member of the theatre group I supervised and today engaged with Theatre for Living in Nakivale. Dusk had already fallen when we finally reached our last destination in the middle of the settlement. It felt vertiginous to get out of the taxi and look around: many people, sand everywhere, cars and mopeds coming and going, no electricity. Fortunately, Joseph Bwinika alias James – a Congolese film-maker who produces edutainment films with and for refugees about social issues in the settlement – guided us to Opportunigee. We were very well received and had something to eat in the tumultuous district of New Congo. Like SINA, Opportunigee is built out of colourful plastic bottles and the walls are artistically painted. It has a big courtyard and a small stage for artistic events. In the back, some shacks serve as a “shower” (when there is water) and toilets. Patrick and his brother Raphaël kindly gave us their sleeping place. Despite my fatigue, I could not get to sleep that night for it felt unbelievable to be where I was. The honour to be hosted by refugees in their homes and to have the privilege to share their realities, filled my heart with respect and gratitude.

The following morning, I got up to prepare the room for the session. Until breakfast time, at nine, there is nothing to eat or drink. Waiting for food and water is strenuous. If there is bread, fruit and tea at Opportunigee, it is provided by Patrick and his team. The food rations supplied by the humanitarian assistance, notably to the newcomers, have drastically decreased over the years and are insufficient. Yet, not all refugees are in the position to be self-sufficient and hence, many depend on their community’s solidarity for subsistence. Little by little the scholars arrived, about forty young refugees originally from Congo, Burundi and Rwanda. What I did not expect was their enthusiasm when they heard I was French and their wish that I hold my session in French. It felt special to me, even more as it meant facilitating a workshop related to peace and conflict in my mother tongue for the first time. I will never forget those shiny eyes, avid to learn. Everyone was deeply concentrated and engaged.
The intuitive writing process based on the question “How can you contribute actively to your self-development?” opened a space for the participants to connect to their self, explore their own insights and, in some cases, name the unspeakable. Through bodily expression, they could co-create, release tensions, ex-press themselves from another place. The fruit of their individual and collective work was outstanding. Out of little, they produced unexpected works of art, be it in the form of a poem, a play, a mime, a rap, or a dance. They used their mouths and their breath to compensate for the lack of music instruments; their voices turned into melodies; their bodies replaced the missing infrastructure. The created pieces mirrored their hopes, their pains, their dreams, their disillusions, their life experience – in all cases, they were tremendously empowering. A warm, loving, and joyful energy filled the whole room. This extra-ordinary journey was closed by a sharing circle wherein everyone could deposit a feeling, a memory, a silence. Sacred moment.

They used their mouths and their breath to compensate for the lack of music instruments; their voices turned into melodies; their bodies replaced the missing infrastructure.

Nonetheless, straight after, many required my exclusive attention to tell me about their respective projects and ideas, as if I could make them real with a wave of a magic wand, which was overwhelming. I felt powerless. Moreover, I was frustrated to have to leave Nakivale so soon. An inner and outer world had been opened and I wanted to spend more time at Opportunigee. The trip planned thereafter no longer made much sense to me; but since everything was arranged, I left, with the growing intention to come back a week later.
However, the few days spent on Lake Bunyonyi and in Bwindi Impenetrable Forest gave me the necessary distance to process and integrate my experience in Nakivale, and travel back there with renewed inspiration. This time, I was alone and stayed longer, which enabled me to practice several tools for conflict transformation with the scholars. Furthermore, thanks to my guardian angels Patrick and James, I could explore the settlement. One of its particularities is that it is organised in “country-districts”. Thus, one walks from New Congo to Eritrea, Burundi, Ethiopia, via Somalia. It was for me amazing to observe how distinct those districts are within the same living conditions. Some are oases of calm, extremely neat and quiet; others are chaotic, dirty, noisy.
Throughout the decades, a whole world has organised itself around bustling markets, tiny shops, sewing workshops, one-room restaurants, schools, churches, and so forth. One of the many things that puzzled me is that during my entire time there I never saw any other white person, although the UNHCR building stands right in the middle of the settlement. I learnt, heard and witnessed a lot about life in Nakivale. Certain aspects thereof were shocking, like the indifference or mistreatment which refugees are experiencing in the settlement hospital or the food smuggle involving the UNHCR, WFP (World Food Programme) and OPM (Office of the Prime Minister), as the media were to later reveal. [4]

I had a hard time leaving Opportunigee and Nakivale as a whole. Their people touched an intimate corner of my heart. While my stay at SINA was most enriching and inspiring, and discovering parts of Uganda was breathtaking, the days I lived in the settlement remain the milestone of my Ugandan journey.

[2] Mulumba, 2014, Humanitarian Assistance and its Implication on the Integration of Refugees in Uganda: Some Observations.

[3] Bagenda, Naggaga, Smith, 2003, Land Problems in Nakivale Settlement and the Implications for Refugee Protection in Uganda.

Isabelle Guibert is a lecturer based in Innsbruck and cooperating in diverse projects in Africa, South America, and France. She teaches in the field of languages, peace and conflict transformation. As a facilitator, her deepest aspiration is to create a hospitable space for her course participants to connect to their self and discover their potential. Her main focus peruses trauma work; forms of communication and expression; unconventional and peace education. She studied in Nantes, Oxford and Innsbruck and holds an MA in English studies and an MA in Peace Studies.