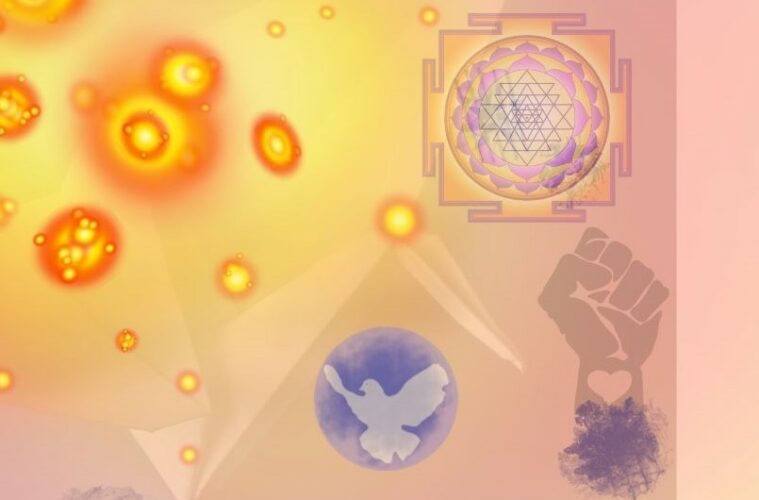 Creativity: The Bottom-Up Force of Peace

On co-creating relationships from the mental to the social realm

Through an encompassing picture of the mind’s activities and a lucid overview of ingroup-outgroup dynamics, this piece shows how creative processes can transform relationships between people, communities, societies, and between people and the planet.

The Mind as a Meaning-Generating Relational Process

The human mind is very creative. One could even say that its most essential feature is a permanent flow of creative expression, as we constantly create images and ideas in exchange with our environment. This conceptual proliferation is probably familiar to every reader. If not: Just close your eyes for a minute and try not to think or see anything in front of your inner eye. This is not an easy task.

Stepping away from mind wandering, even just for a moment, calming the abundant creativity of the mind takes effort. This effort is a basic competence for conflict transformation, especially when strong emotions are involved. Distancing oneself from the continuous flow of mental content helps to recognize one’s own prejudices. This way we can develop meta-awareness (thinking about thinking). As a path to compassion and dialogue, we can tap into this awareness by asking: What is going through my mind? Where am I, what is happening and what do I think about it? Should I believe what I think?

This article aims to shed light on the phenomenon of creativity and its role in transforming people, shaping societies and dealing with their conflicts. It wants to show how the narratives we cultivate about ourselves and others, which emerge at the level of everyday interactions, influence and ultimately constitute the larger whole. Creativity here means co-creating our internal and interpersonal relationships, the relationships between groups and societies, as well as those between people and the planet.

Working with Creativity for Peace on a Humanistic Foundation of Values

Elicitive Conflict Transformation (ECT) methods are approaches to conflict work that give space to individual and local creativity to enable dialogue in the complex interplay of individual, group and society, shaping the process of democratic change. Researched and taught at the UNESCO Chair for Peace Studies at the University of Innsbruck (Austria), these methods are characterized by their attempt to elicit the already existing knowledge of the parties involved in a conflict to promote sustainable change. The basic assumption is that people can transform their conflicts on their own. Professionals may only support this process by facilitating space for participants to tap into their creativity and envision peaceful change in their particular context and sphere of influence.

The theoretical basis of ECT is the Transrational philosophy of peace (see Dietrich 2013). It aims to integrate insights from systems science into applied conflict work. In this tradition, transrational does not mean turning away from rational logics of reasoning, but emphasizing the basic assumption that the individual is a node in complex systems of relationships, not conceivable apart from them. Transrational worldviews build on connectivity and resilience of social networks that stand behind the individual. They cannot subscribe to the subject-object separation of modernity, which has been shown to be incorrect in the light of systems science. Moreover, there will always be aspects of experience which are not accessible to rational discourse, but which are fundamental to being human. These are found in the quality of our relationships, in the many subtle perceptions we may have of ourselves and the world that lose their vividness when put into words.

In contrast to a mechanistic understanding of the human being – which follows the Cartesian worldview that is associated with the advent of modernity – transrationslists understand the body, movement and mind as a continuum, always embedded in a complex landscape of relationships. So the mind, as well as ‘the self’, is no longer thought of as a separate entity from the body and its environment. Thus, body-oriented methods are also considered and practiced as a central tool of conflict transformation. As a further consequence, the individual human mind is seen as a continuous process of changing perceptual figures, embedded in symbolic interactions. The term ‘mind’ is therefore to be understood in this article as a body-mind-relationship continuum.

It is essential to consider that although rational thinking has brought us many helpful technological achievements, in combination with greed for power and misanthropic ideologies it has also produced the most terrible historical excesses of human creativity, such as systematic killings in concentration camps, atomic and hydrogen bombs, psychological torture in secret prisons or remote-controlled state terrorism by drones. The power of creativity is ultimately completely neutral in itself. It is up to us how we use it.

Working with creativity for peace needs a humanistic foundation of values, a process of radically friendly attention to everything unknown, including the ‘enemy’. This entails the necessity of a conscious approach to our creativity. Crucially so, because both surrendering to creativity as well as distancing ourselves from it are important for conflict transformation. If the everyday flow of thought is an expression of creativity, then perhaps the step of distancing oneself from it and meeting the unknown with kindness could be called an act of meta-creativity. In this distance, the possibility of rethinking belonging is found.

Why it is necessary to deconstruct Ingroup-Outgroup Dynamics

We human beings have become the makers of this earth through our power of creation. Climate change and environmental degradation in the Anthropocene represent a global problem that we can only work on together. The rate of biodiversity loss, the pollution of our nutrients, and the acidification of the oceans confront us with our own failures on a grand scale. These failures have social consequences that can deepen already existing conflicts and create lots of new ones.

We are destroying our own living conditions and are seemingly incapable of cooperating internationally. In the face of both personal and global problems, we tend not to see ourselves as part of the mess, but to blame others. Excluding and blaming others, creating images of the enemy, can also be seen as a creative process. Shedding light on these processes, Peace Studies help us understand the emergence of feelings of community or belonging: How does this ‘we-feeling’ emerge in a social group, as an emotional field of bonds and solidarity between the individuals involved?

Unfortunately, group cohesion in human groups is mainly created by ingroup-outgroup dynamics, that is, when a human group manages to create a higher level of team spirit, a stronger connection and coherence, it automatically creates a stronger devaluation of members of other groups. This tendency to separate is evolutionarily rooted in our mental processes, developed over millions of years. The deep structure of our own mind constantly evaluates ingroup and outgroup and prevents us from feeling and living as if we belonged to the human family as a whole.

Religious and political ideologies, in particular, are excellent for generating group cohesion since they offer sign systems for dealing with complexity, impermanence and death. Since no one knows for sure what the new will bring, we often prefer to stay with the old, even though we can clearly see its flaws. This fear of change makes us all the more receptive to ideologies that promise us security (and afterlife). So practicing peace also means to become aware of these social dynamics of belonging again and again, to deconstruct exclusion and dehumanization of others.

(…) [It] requires the capacity to imagine ourselves in a web of relationships that includes our enemies; the ability to sustain a paradoxical curiosity that embraces complexity without reliance on dualistic polarity; the fundamental belief in and pursuit of the creative act; and the acceptance of the inherent risk of stepping into the mystery of the unknown that lies beyond the far too familiar landscape of violence (Lederach 2010, 5).

This means always keeping in mind the possibility, however unlikely, that I am wrong in my assessment of the situation, in my rejection and dislike of a person or group, and that there is always the chance that they may have changed. Peace thus begins with a curiosity that first endures and allows to exist even what is obviously contradictory and wrong. Without thereby accepting border violations and exploitation or neglecting one’s own needs, a space of possibility is opened: the possibility of understanding and forgiveness.

Peace: Widening the Circle of Cooperation Despite Difference

Creativity is a phenomenon that permeates several systemic levels. In the circular interplay of individual, group, society and world system, peace can be understood as the unfolding and expansion of the individual in its relationships. The bottom-up dynamics of peace are therefore created in the interactions at the individual level, even below the visible surface of civil society.

Through creative self-expression one may expand the circle of cooperation and belonging in one’s own imagination and help build new systems in which diversity can be recognized as a great strength. Finding and emphasizing common needs and tasks, without conforming and making the unequal equal, allows new fields of identification to emerge, a larger, hybrid ‘we’. In this way, one can learn to endure complexity and contradiction and keep up social engagement with foreign people and ideas.

A practical example of this would be loving kindness, which is a meditation practice in classical Buddhism (traditionally called mettā in the Pali language or maitrī in Sanskrit). Kindness, goodness, active interest in others, love, friendship, sympathy, curiosity: Think for a moment about how it feels when someone brings these qualities to you in a difficult conversation. The practitioner begins with him- or herself to invite the state of mind of loving kindness, through inner repetition of the intention: may you be happy, may you be healthy, may you live in ease. The practice is to extend the attitude of loving kindness to all sentient beings, step by step. I think that secular peace scholarship should be informed by such practices of empathy. They are helpful examples of how we can use our imagination to include those with whom we disagree in our compassion.