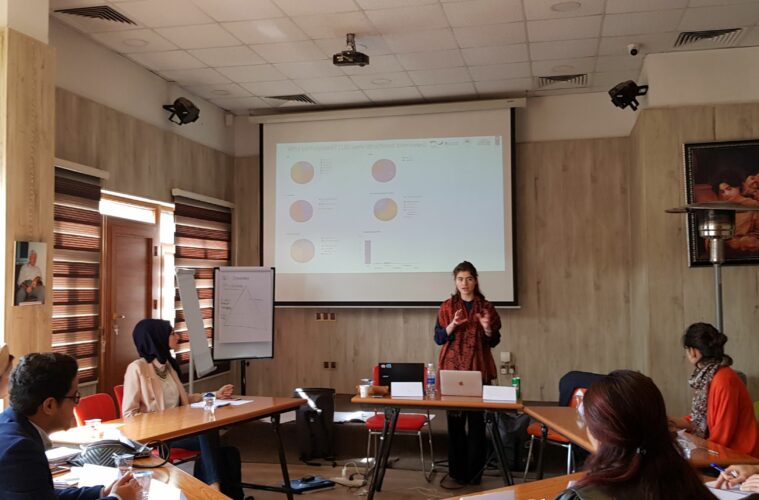 The Gift of a Unique Moment: Researching Peace and Conflict dynamics in Iraq in 2019

Since 2017, the Unit for Peace and Conflict Studies at Innsbruck University (UIBK) has been working with the Iraqi Al Amal Association (IAA) on the development of Peace and Conflict Studies Programs in Iraq. The project was funded by the United Nations Development Programme in Iraq (UNDP). It included the formulation and implementation of curricula with nine Iraqi universities, Elicitive Peace and Conflict Monitoring in four of the country’s cities, as well as training of youth capacities in Conflict Transformation. People from different backgrounds and origins worked together in the four phases of the undertaking. They brought in their professional knowledge, established new relationships and broadened their perspectives. We had a talk with two of them, Alba Losert and Muntather Hasan, about their experiences and contributions to the projects.

Many Peaces Magazine: One of you is based in Austria, the other one in Iraq, so you are geographically quite far apart. How did you come in contact with the project that would bring you together, and what were your respective roles?

Hasan: That is kind of a long story. In short, I volunteered with youth groups in Iraq before and co-founded one in Najaf in 2012. Through youth work, I came in contact with the Iraqi Al Amal Association. In 2016, I started my first employment with them as a coordinator for the youth part of the first phase of the project. After that, I’ve become project writer, and supervisor until the end of the fourth phase, which was when UIBK implemented ECM.1

Losert: I had contact through the University of Innsbruck. During my initial studies, I was frustrated about the prevalence of nation-state perspectives and the prescriptive analysis without regards to the different backgrounds of conflicts. So I was looking for alternatives, and how to include on-ground work and context into research. I came into contact with the ideas of transrational approaches, which fascinated me. Through this, I met Adham Hamed, who invited me to be a research fellow in the third phase of the Iraq-Project, where he was by then managing the collaboration with Al Amal from UIBK side.

Many Peaces Magazine: Did language barriers play a role for you during the project?

Losert: They did, indeed. The main sources for our research were interviews that were conducted by the people from Al Amal. Most of them were in Arabic and then translated. Arabic is such a colourful language, full of metaphor, so we had a lot of exchange between the Austrians and the Iraqis about how to interpret things. We had several rounds of feedback and direct exchange to make sure we understood our data correctly. All remote, which made it even more complicated. I would have loved to sit together with Muntather in an office somewhere, that would have made things easier.

Hasan: The topic of translation was way more complex than we expected in the beginning. We tried to find field researchers with good command of English, but could only find about half the number required. S, many interviews were delivered in Arabic. We all spent a lot of time on it. Not only in formal layers like workshops, but also informally, like reviewing data over a drink or exchanging via Messenger. Despite the challenge, I’d say that the latter was actually a rather fun part of it.

Many Peaces Magazine: So the additional requirements for translation was the biggest challenge for you during the project?

Hasan: It definitely contributed. But what was hardest for me was working with very strict guidelines regarding budget. We had to constantly keep in mind to balance the funds without losing quality of work, and to coordinate that with UIBK. Rearranging the budget between the different parts of the project was practically not possible. It would have taken maybe about eight weeks to get it approved – within a total funding period of seven months. This impeded our flexibility, especially during the major changes of the security situation in Iraq from the protests of October 2019 on. Many donors are very focussed on numbers and  written guiding principles. That makes it difficult to deal with sudden changes.

Losert: I did not have responsibility regarding the budget, but I also have learned some lessons there. We were not properly prepared for the challenges the translations posed to us. I would have never thought how much time it takes to translate, understand and discuss interview material. For the future, I would definitely plan more time for this crucial research step.

Nevertheless, I would say my main challenge was to combine unique and powerful messages with more dominant peace and conflict dynamics: Do I focus on one significant statement, which is valuable due to its rareness? Or do I take into account the several narratives, which feed into a predominant peace and conflict dynamic? For me, it was important to find that balance and connect it to a given context. We had to develop ways to analyse each topic in a different way, taking into account for example tribal or gender perspectives. It was not planned to write a manual on how to do all this by the project design. But I feel that the report finalizing the project was partly that, so the end of it was actually the point to start putting into action all that we had learned. This not happening made me feel frustrated. I would have wished for more exchange and resonance on that from an official side and also an exchange on this approach with the researchers.

Hasan: To clarify the remarks on the budget: The payment for the collection of the data on the ground was acceptable by Iraqi standards. It was, again, the translation part that was underpaid, as it had not been accounted for in the planning. Many researchers were trainees of Al Amal. We highly appreciate that they offered to do this part largely voluntarily. Still, the wish remains to also compensate them in that way for their exceptional work.

Regarding the report, I also feel a bit of frustration that there was no time to revise it. As it was the end of the project set by UNDP, we had to deliver within that frame. But I am using it a lot, for example for writing proposals, and some of Al Amal’s current actions are based on it. UNDP has also shared it with their partners, and it is disseminated online.

Many Peaces Magazine: What were your personal highlights during the project?

Losert: On the professional level, trying out a new and unique approach, with freedom to explore and refine my own methods. But overall, I found it most beautiful to see the developments after the start of the demonstrations in October. Despite the worsening security situation, the data we analysed showed an increasing will for harmony and trust and a striving for truth among the people. There are always peace and conflict dynamics ongoing, so we cannot focus on one of them without accounting for the other. And seeing people from different ethnic and spiritual communities deciding to go out seeking dialogue and discussing their perspective in a war-torn city like Mosul was indeed beautiful.

Hasan: As Alba said, being able to conduct research in such a unique moment was really a gift. Those were the broadest protests in Iraqi history, and they mark a change in public thinking. It was the first time that people told the government “Enough!”. I feel like many perspectives have shifted. The formerly mainly sectarian discourse was dumped. We could collect the rough emotion of this time, with feelings and opinions being raw and unconcealed. If we would do this research now, there would be a completely different result.

Many Peaces Magazine: Finally, how will you continue after this project?

Hasan: As an individual, I decided to further engage with ECM. Currently, I established a group of Iraqi researchers within Al Amal who have done field research interviews in three Iraqi cities. As an organisation, we got a lot of insights. Like the importance of peaceful or Nonviolent Communication2 in peacework, which we are training activists in now. Also, we are trying to find new donors for follow-up projects that will be based on the findings of this one. Many of our researchers continued working in data collection, which gives them new perspectives after many of them lost their income during the war against ISIS.

As Al Amal will use ECM further, the collaboration with UIBK stays important, also on the individual level. Three of our trainees are now students in Innsbruck. I highly appreciate the passion and willingness of the UIBK team. Working together with them, I felt we were really doing something meaningful.

Losert: I will also continue to use ECM in my work. There are always new things to include, new contexts to fit it to, new dynamics to take into account. Together with Adham Hamed, I am currently investigating the idea of becoming a citizen through acts that arose in Iraq during the time of the project. Also, I would really appreciate working with Al Amal again. During the project, I felt very welcomed, it was like being at home. This was the moment that I understood the concept of relational security. And I am going to need more of the dried lime tea…

Losert: … as my family and friends drank all that I brought back!

More information on the project is available at the UIBK Research & Projects website. https://www.uibk.ac.at/peacestudies/research/undp/index.html.en

1 Elicitive Conflict Mapping is a tool developed by the UNESCO Chair for Peace Studies. It uses the four themes harmony, justice, security and truth, each subdivided into different layers, to analyse the episodes of a conflict. It aims to supply the user with an idea of the needs of the conflicting parties that are not being met and thereby shows different ways to maintain or recover balance without offering prescriptive solutions. Read more at https://www.uibk.ac.at/peacestudies/research/ecm/introduction/

2 Nonviolent Communication is a way of communication that focuses on clear understanding and expression of one’s own observations, needs, feelings and values. It aims to use a language free of blame, judgement or domination and thereby fosters understanding and empathy. Learn more at https://www.cnvc.org/learn-nvc/what-is-nvc