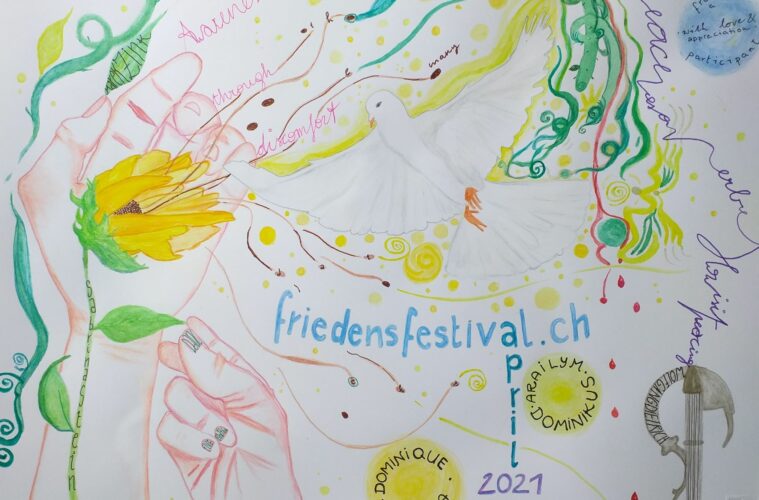 In and out of the Comfort Zone – Friedensfestival.ch

Within the frame of the online peace festival on Friedensfestival.ch, between 7 and 14 April 2021, proficients in the German language could take part in many different discussion rounds, presentations, and embodied activities on screen. Organizer Laura Condrau and participant Stefania Kerschbaumer reflect about their experiences.

SK – As the viewer can perceive through the image, it is challenging to describe with words an event that touched its participants on so many levels – without actual touch. The most  palpable example for me is the penultimate activity offered: the 5Rhythms1 dance. After clearing the room of a hazardous carpet and a few other adjustable pieces of furniture, I followed the helpful guidance of the facilitator and ‘flowed’, ‘staccatoed’, ‘chaosed’, ‘lyrical-ed’, and ‘stillness-ed’ with the music. From the screen where the voice came, many small windows shone with as much movement – a solaceful, strengthening experience.

LC – The organizing team of the festival consisted of two men and two women with different perspectives on peace: Dominique, Dominikus, Arai and myself. Dominique, originally an environmental scientist, had the idea, and slowly the other three gathered around him. It was astonishing to experience the openness of each one of us to accept our very different inputs for the festival. The team’s diversity was then reflected by the diversity of speakers that appeared one after the another on Zoom. Speakers and participants joined us from Germany, Austria, Switzerland, Myanmar and Portugal, and spoke about transrational, energetic, postmodern and moral peaces.

SK – These speeches and discussions, accompanied by small-group activities, opened up so many different windows for me. The idea of welcoming discomfort as an opportunity for peaceful change was central in Marek Zink’s contribution. With the help of the principles of Nonviolent Communication, he showed the participants ways to unravel, understand and transform moments of imbalance, chaos or conflict in different kinds of relationships. Sabrina Stein offered an inspiring talk and the space to reflect on stories we connect to deaths – the many deaths and the many relationships that exist with it varying from tabooed to painful, relaxed to conflicted, and intimate to peaceful to name only a few I witnessed within my break-out session. Conceiving peace as a verb added a new dimension to the mind-boggling ideas I met during the peace-festival week. Professor Wolfgang Dietrich proposed we ask each other, “How do you peace?” – with all its reverberations: the biggest ones being a loud shift within our linguistic system, our mindsets, and the way we meet each other.

LC – One of the highlights to me was when I realized that there are many people in the German language area acknowledging the importance of inner peaces to conflict transformation. Another highlight was that we managed to bring together around 80 people for the opening ceremony. However, one of the downfalls was that while planning, one peace organization did not want to be present at the festival due to differences with two of our partner organisations. Norbert Koppensteiner, a former lecturer at Peace Studies Innsbruck once said: “Peace work begins when we engage with difference.” It’s quite unsettling that peace work is also needed within the peace movement. I wish to open up more spaces where people with different opinions can meet each other in a safe and constructive environment. It might give them the opportunity to learn that meeting people with a different perspective does not necessarily end in a loss of reputation, but that is a mutual give-and-take in and out of the comfort zone.